Take up an idea, make it your style, your spirit of life, the AT spirit!

The G.R.I. ALFA TANGO is the most famous DX Group on 11 meters band. News, cluster, discussion boards and a lot of useful information on activations, dxpeditions, contests and meetings all around the world. 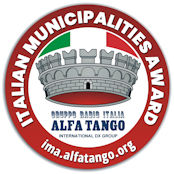 The first time ever on 11 meters !

Open and free for all 11 meters operators world wide, its main purpose is to encourage as many radio operators as possible to use the band and keep the 11-meters alive. The aim is to establish contacts with the highest number of Italian Municipalities.

Each Italian municipality is classified with a precise static reference becoming from the fiscal references relased by the italian autorities.

RULES FOR ALL HUNTERS

Municipality (Comune) means the whole territory related to that municipal area. The updated list of references is published on the I.M.A. site.

the event have an unlimited duration and is therefore to be considered as permanent.

a) Activities will take place on 11 meter band, on PHONE and entirely on SSB.
b) The section of the band between .500 and .600 included (called DX part) will not be used. Contacts potentially made in the DX part of the band will be deleted from submitted logs and relative contacts will non count for the reference.

HUNTERS
Hunters are NOT required to send their logs. An updated ranking will be drawn up using the logs received from the activators.

ACTIVATORS
This category is composed by resident and non-resident activators, all AT Italian operators in good standing with the renewal, who must fallow a specific regulation in order to candidate and announce each activation.

"HUNTERS" and  "ACTIVATORS" rankings will be regularly published on the website and updated according with the logs received and the verification of the proofs made by the Organizing Team.

The Italian Municipalities Award will be permanently available as a free digital download for all participants, both for HUNTERS and ACTIVATORS.

THE ORGANIZING COMMITTEE RESERVES THE RIGHT TO MAKE CHANGES TO THIS REGULATION AT ANY TIME.